If you’ve been to any fast food restaurant lately, you may have noticed the fancy, new Freestyle Coke machines. 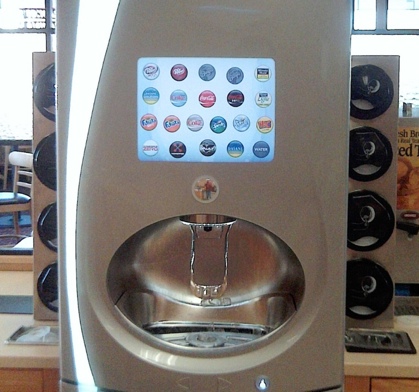 It’s got a touchscreen. It’s got 187 flavor combinations. It’s the Way of the Future™.

Let me walk you through my first few encounters with a Freestyle.

The first step is to get ice for my soda. Right off the bat, I run into issues. Unlike the traditional soda fountains, the Freestyle has only a single “prong” instead of the four to eight prong design. The only instructions for getting ice after engraved in the clear plastic prong — which is not super easy to read because it is not at eye-level and there are shadows due to the recessed nature of the dispensing area.

Next comes the selection of the flavor. I notice that the touchscreen is laggy. I don’t know if this is a hardware (the machines use a projected capacitance screen) or software issue, but when people are used to super responsive tablets and phones, even minor slowness sticks out.

Upon selecting the base syrup, you can pick any flavor add-ons. I opted to pass and go with regular old Diet Coke. You might expect to just press on the big circular buttons on the touch screen to start dispensing your sugary goodness, but alas, it is not that simple. To dispense your soda, you have to press a red button below the touch screen.

So to recap: to get ice, press a prong. To pick a drink, use the touch screen. To dispense the drink, press a physical button.

But hey, I’ve got an engineering degree. I can figure it out.

If those were the only issues, I could probably get over it. But those are only the user interface grievances I have.

Here’s more interaction issues that bug me about the Freestyle:

Maybe I have an irrational hatred for the Freestyle. But whenever I see one, I can’t help thinking this is my generation’s New Coke. Same great taste, now with a touchscreen slapped on it!