"A Short History of Nearly Everything" Book Writeup 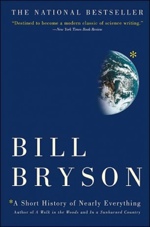 What’s the point?
Have you ever wondered how exactly scientists can measure the weight of the Earth?

Have you ever wondered how the Periodical Table of Elements came to be?

Did you know that the paleontologists that discovered the most well-known dinosaurs were bitter rivals and constantly smeared each other’s names in scientific publications?

Those are the kind of questions this book tries to answer in a whirlwind summary of the origins of astronomy, chemistry, geology, particle physics, and more.

How was it?
This was a fun read. It was less like a textbook and more like a transcript from an NPR radio show.

There were plenty of fascinating characters throughout history, including a minister/amateur astronomer who holds the record for most discovered supernovae and a team of French scientists that spent years trying to measure the length of one degree of the Earth’s circumference (they encountered hostile natives, jungle illness, deaths of several team members).

The book discusses the origin of life and the likely ends of human life (my money is on a meteor strike). It covers topics from the small (sub-atomic particles) to the very large (black holes, galaxies). You’ll learn how the millions of specifies of organisms evolved and how humans have somewhat unintentionally caused the extinction of most of them.

Who should read it?
I found the book to be an enjoyable blend of learning and humor and would recommend it to anyone that has ever sat through a high school science class and wondered why it was so damn boring.