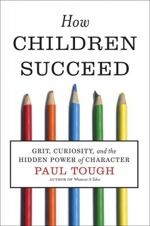 What’s the point?
Traditional wisdom tells us that intelligence is a leading indicator in predicting success in life — children that score highly on preschool admissions tests are setup on a path that will eventually lead to a college degree, high paying job, and a successful life.

Paul Tough argues that success has more to do with “life skills” that children develop, basically how much grit you have.

How was it?
Merlin Mann ranted, raved, and spent two episodes of Back to Work covering the idea of grit (and referenced this book in particular). It is an attractive notion for most people: we aren’t locked into a path based on our inherent intelligence, but rather those that work hard will ultimately succeed.

There is certainly more to it than just “working hard”, as the book describes. The whole concept of grit is really more of a combination of several characteristics: self-control, optimism, perseverance, resilience, stick-to-itiveness, and more.

Martin Seligman (same guy from Learned Optimism) even came up with 24 different measurements for these character strengths.

I enjoyed the coverage of alternative charter school programs and how schools serving low-income students can hack the system and provide the same tools for success as expensive private schools. By emphasizing the importance of character, these schools were, in some cases, able to start closing the gap between the privileged and the not-so-privileged.

I also found the story of the inner city high school chess team to be really fascinating. By using techniques inspired from psychotherapy, the chess team coach helped students learn from their mistakes and better handle their losses. By building up this quality in her team, they were able to dominate schools that would be favored by more traditional metrics (IQ, income level, quality of education).

Who should read it?
While the book is primarily focused on education, I think the idea that IQ isn’t the end-all, be-all predictor of success is an interesting one to explore in any field.

Software certainly has many cases of individuals without strong academic backgrounds succeeding through raw grit, determination, and courage.