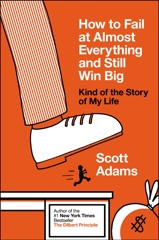 What’s the point?
Scott Adams created the mega-successful Dilbert comic strip. But he has also failed at a ton of things, including a career in banking, making computer games, opening restaurants, and launching a TV show. Each failure taught him something important that he would later use to find success.

How was it?
The book has a very conversational style and was an enjoyable read. The author recounts his long list of failures — but also what he learns from each endeavor. For example, a failed publishing venture selling meditation guides never got off the ground, but Adams learned the ins-and-outs of advertising and marketing that benefited him later on.

Mr. Adams also explains why he thinks setting goals are for suckers. He argues that it is better to setup systems. Once you achieve a goal, you celebrate but lose all purpose. With a system, you get small rewards every time you apply your system and can continually improve. It is mostly a semantic difference, but I’ve found it to be very true in my own experiences.

I enjoyed Adams’ advice to try to optimize your life around your own personal energy and enthusiasm. Not everyone works most efficiently in the same way or at the same time of day — and not all tasks require the same kind of energy. Adams also talks doing certain types of work in their own designated settings, like going to a certain coffee shop to work on particularly tricky.

There are some diversions along the way that cover Scott’s unusual medical history, his take on diet and exercise, and some anecdotes about affirmations (which may turn off some potential readers). Personally, I really enjoyed the tangents.

Who should read it?
The book is a quick read, pretty funny, and has enough practical advice for me to give it a good recommendation.