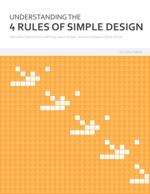 Understanding the Four Rules of Simple Design: and other lessons from watching thousands of pairs work on Conway's Game of Life Corey Haines

What’s the point?
A few years ago, I spent a Saturday in a room of developers doing a “Code Retreat”. The idea is to work on solving Conway’s Game of Life as an exercise in small-scale software design. You work in a pair for 45 minutes, sometimes with special constraints like “no if-statements” or “no mutation”, and then you promptly delete all the code, switch partners, and start again.

Corey Haines is the main facilitator of this event and this book catalogues some of the core lessons he learned from running these retreats over the past five years. He codifies these lessons into “the four rules of simple design” — a set of guidelines coined by Kent Beck in the 1990s.

How was it?
A very quick and enjoyable read. By limiting the scope of the book to Conway’s Game of Life, the author is able to go deep into discussions without having to construct new examples for every concept.

The four rules — tests pass, expresses intent, no duplication, and simple — seem to be a bit more approachable than the more formal rules (SOLID, Law of Demeter, etc). I appreciated that the rules have a bit of room for interpretation and discussion.

After a brief explanation of each rule, the author dives into concrete examples and explains some of the more nuanced points, such as “topology duplication” and testing behavior to show intent.

I had a real Aha moment when I came across an example of “tests that depend on previous tests”. In this specific case, an assumption was made about the default constructor of an object. Because there was a lack of explicitness, unrelated changes caused a whole bunch of tests to fail. The solution — which I’ve had trouble articulating in the past — is to use builder methods and not allow external callers to use a default constructor. This had the added benefit of being more clear, since the name of the build method was more revealing than an empty new().

Who should read it?
Anyone struggling with uncertainity about how to design object relationships would benefit from this book. As a past Code Retreat attendee, I enjoyed being able to look back and see how a master of the domain implemented solutions; it felt kind of like I was reading the secret solution’s manual :-)