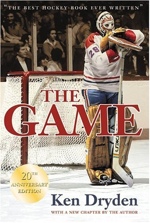 What’s the point?
Ken Dryden played goalie (hockey) for the Montreal Canadiens in the 1970’s. He played only six regular season games before earning the #1 goalie spot and leading his team to a Stanley Cup. Ken would end up playing just over seven full seasons in the NHl; he won six Stanley Cups.

Ken took a year off — in the prime of his career — to finish law school amid contract disputes. Since retiring, Ken has authored six books and served in Canada’s parliament as the Minister of Social Development; definitely not your average jock.

The Game takes place over a one week period in 1979 — the final season of Ken’s career. As Ken narrates another run-of-the-mill week, he writes in an incredibly reflective style and uses every small interaction as a springboard for larger, deeper discussions.

How was it?
I’m a big hockey fan so I really enjoyed this book. Ken explored not only the day-to-day grind of being a professional athlete, but also how the sport evolved over time. Some concepts like team chemistry or mental superstitions seem a bit silly to outside observers, but to Ken, they were essential and part of the game.

Every person in the organization had an important role, from the star players to the aging veterans to the trainers and arena ushers. Weird rituals worked because they took your mind off the pressure of performing, not because of any magic voodoo.

On the need for strong leads:

On the shift from Canada’s backyard hockey to organized youth leagues:

Constantly preoccupied with time and keeping ourselves busy (we have come to answer the ritual question, “How are you?” with what we apparently equate with good health, “Busy”), we treat non-school, non-sleeping or non-eating time, unbudgeted free time, with suspicion and no little fear.

It is in free time that the special player develops, not in the competitive expedience of games, in hour-long practices once a week, in mechanical devotion to packaged, processed, coaching-manual, hockey-school skills. But without such time a player is like a student cramming for exams. His skills are like answers memorized by his body, specific, limited to what is expected, random and separate, with no overviews to organize and bring them together.

On relying on over-reliance on past success:

They won in the past, they lose in the present; it must be in the past that the answers lie. But there are no answers in the past, only clues as to what went wrong along the way. They know it, yet they can’t stop themselves from looking, and hoping.

Who should read it?
Obviously, this book will be less interesting if you’re not into hockey or sports in general. Personally, I enjoy reading anything well-written that examines a master of their field, so this fits the bill perfectly.