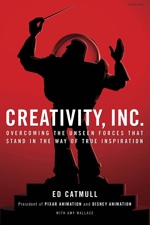 What’s the point?
This is the story of Pixar. As Catmull recounts Pixar’s crazy history, he weaves in his thoughts on managing creative teams and organizations. As the company grows from scrappy startup to critically-acclaimed darling, Catmull experiences different challenges. How do you scale a creative process from a 5 person company to a 500 person company? How do you protect your culture as you take on new investors, hire new employees or get acquired?

Even without the incredible inside look at how Pixar makes films, the story is just fascinating, as the Pixar team crosses paths with Alan Kay, George Lucas, Steve Jobs, Michael Eisner (CEO of Disney), Jim Clark (founder of Netscape), John Warnock (founder of Adobe), and Bill Joy (founder of Sun Microsystems).

How was it?
I couldn’t put this book down. Unlike some other business books that tell the stories of lesser-known companies (I’m looking at you Eric Ries…), everyone has heard of Pixar and is familiar with their outputs.

It was enlightening to see how Catmull’s processes adapted as the company grew in both size and success. The core values of candor (honesty with a lack of reserve) and fearlessness (freedom to try and fail) have lead the company through times of stress, uncertainty, and dramatic changes.

By the time you get half way through the book, you are completely sold on how Pixar does things, but maybe a little skeptical about the practical implications — it sounds great in the book, but is that how it actually works? Could I apply any of that stuff outside a 3D animation studio?

And then, Catmull delivers the goods. The final third of the book pulls back the curtain and deep dives into the techniques and mechanisms Pixar uses to collaborate. It was surprising to see how much overlap their was with software process; “Dailies” map to team standups and swarming to remove blockers, visualizing the work flow to help teams impose limits, doing postmortems to close out films, and more.

Pixar’s concept of the Braintrust — a group of proven problem solvers meeting to provide constructive criticism — seems like a concept that is missing from the de-facto software process. There is no authority, no mandated solutions, no selfish agendas. The goal is to help the director raise their game and solve their own problems, not to just prescribe fixes that worked in the past.

Lastly, it was refreshing to see Catmull directly address the Special Snowflake argument. Sure, this is all great, but it was only coincidence, or timing, or the special people, that made it work for Pixar! The final chapter, taking place after Disney buys Pixar, shows how Pixar replicated their successes and methods inside an existing corporate structure.

Who should read it?
Anyone working in a creative environment can take something away from this book. Unfortunately, devote believers in The Pixar Theory may be disappointed.