"The Soul of a Chef" Book Writeup 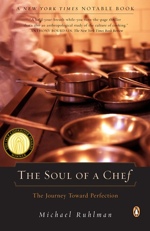 The Soul of a Chef: The Journey Toward Perfection Michael Ruhlman ISBN: 0141001895

What’s the point?
Michael Ruhlman immerses himself in the Certified Master Chef exam, a modest upstart restaurant in Cleveland, and the world-renowned French Laundry in Napa Valley in search of culinary perfection. Can you find measurable excellence in a subjective arena? How do you balance technique, art, personal standards, and keeping the lights on?

How was it?
I’m a big fan of Ruhlman’s writing, so I found the follow-up to “The Making of a Chef” to be excellent.

The first section explores the chicken-and-egg situation for formal certification. For a certificiation to gain credibility, quality chefs must pass the exam and go out into industry. But without a critical mass of existing credentialed chefs, it is an uphill battle to convince chefs and employeers of the merits. Additionally, some portion of industry will always treat top-down, academic standards as out-of-touch with reality.

From a software perspective, the parallels are obvious. Programs like Microsoft’s MCSE aim to demonstrate an individual’s expertise; meanwhile the NCEES is pushing for a formalized professional license for software engineers. The same debate applies in this case: do employeers believe in the value these exams claim to have? Does passing these tests mean you are truly an expert? Can a single test score capture the depth and breadth required to be successful in industry?

After exploring the objective truths of great cooking (at least according to some), Ruhlman shifts focus to Lola — a up-and-coming restaurant launched by rising star Michael Symon. In the real-world of a busy restaurant, things are a bit more fly by the seat of one’s pants than the grading scale of the Certified Master Chef exam. Even though the standards were more lax and the chefs a bit more sloppy, food went out and customers were happy.

This sounds an awful lot like tech startups, or just small software companies in general. The real world is different than school; standards and practices vary wildly across companies. To Ruhlman, a pot of water boiling over was unheard of at culinary school — but not out of the ordinary at a busy restaurant on a Saturday night. Some developers would be shocked to see a software project without tests or source control, but I can assure you that many businesses succeed with such software (or perhaps in spite of…).

Ruhlman wraps up his tour de force with a stop at Thomas Keller’s The French Laundry. Here we discover the other end of the spectrum: a restaurant that favors quality of the food over just about everything else (it took several years before the restaurant was profitable). Keller preached moving slowly, if you were rushing, you had done something wrong and your food would suffer.

One of my favorite quotes:

…you can’t spend half a career as someone else’s employee and then suddenly, one day, start thinking like an owner. If you wanted to be a great chef and restaurateur, you had to think like an owner and act like the owner from your very first job.

Who should read it?
I’ll recycle my own recommendation of Ruhlman’s previous book: if you have any interest in food (even if you just watch Top Chef) you will like this book.