T-shaped people are all the rage right now in knowledge-work pop-culture.

For those not in the know (what a terrible faux pas on your part!), a person with T-shaped skills is someone who has deep expertise in one area but also breadth of generalized experience. Apparently, if you plot skills across those axes then it looks like a T…or something. 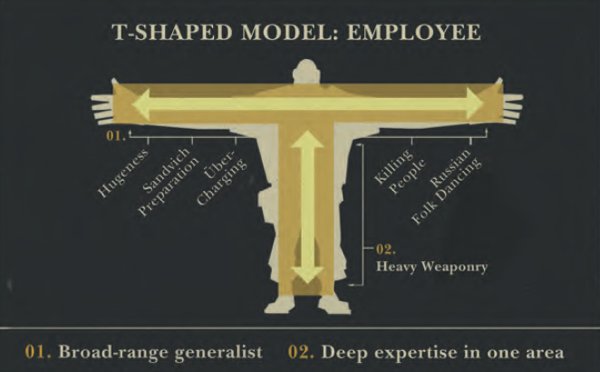 Anyways, people are raving about this concept and they are mostly justified. If you can find a T-shaped person, then they can collaborate across disciplines and provide more overall value to a project than someone who is just a .NET developer or just a designer.

Slightly different variations of this type of person have been in vogue lately: someone with Founder Skills, a Hybrid, a Full Stack Product Hacker, etc.

I came across an old — in internet time — article from Mark Otto (pre-Bootstrap fame!) about investing in gaining T-shaped skills as a fresh-out designer.

I’ll throw modesty aside for a second and say that I am a T-shaped developer.

I go deep into web development, but I’ve acquired some skills in design, UX, copy writing, testing, product ownership, and even a little marketing. I also know enough dev-ops type stuff to (crappily) setup a VPS, use Heroku/AWS, fiddle with DNS, configure backups and use a build server.

I could pretend to say I had the wisdom and foresight to take a deliberate approach like Mark advised, but that’s not how it actually happened for me.

It was because I am impatient and can’t let go.

When I first finished school, I did not have a “T-shaped mindset”. I would think about an app I wanted to build and then I’d get to the point where I was like, “Okay, cool! But now I need to find someone else to code the database and then I need a designer to make it pretty”.

Collaboration is great, but when you are an introverted developer without a network of peers…well, you end up with a lot of projects that never even get started because a team to help you doesn’t just magically appear.

Instead of pushing past my comfort zone, I would stay turtled within my own little world of capability. I could contribute to projects at work, but I couldn’t ship something on my own.

It is almost comical when I look back. I would say things like, “I need Dave to finish this feature because it needs JavaScript changes”. I would start actively avoiding tasks that seemed hard to me; I would always Retreat Into Competence and refill my confidence meter by doing easy things that felt familiar.

And let me tell you, that is a very tempting path to take. After four long days of WHY THE F*** WON’T ORACLE WORK, cranking out yet another web form is almost therapeutic. If I can just hop between cherry-picked tasks for long enough then someone else will take care of the hard stuff. Anxiety levels drop back to normal.

Things changed when I started working on stuff I really cared about. Not to say that I didn’t care about other projects I was working on, but it is different when it’s your baby (or even if you are just part of a project from the very beginning).

When you work on something that is yours, when you have skin in the game, you suddenly become a perfectionist. Could I delegate some development work to another person? Sure, I could. But it is easier to just do it myself, that way it will be “right” and how I wanted it. I’ve been That Guy so much; it’s something I’m really trying to work on.

And when I did delegate some non-programming stuff, it didn’t go much better.

I got tired on waiting on people. It wasn’t even that others were taking too long or anything like that. I am a momentum-based person. When I get into something, I have one speed: GO GO GO.

I was impatient. I didn’t want to wait until next week when a designer had time to help me. So I’d say screw it and do it myself. It would suck but at least I was moving. Who wants to have three meetings to discuss what the marketing page should say? I’ll just write it myself and be done with it.

Because I was so damn stubborn and couldn’t bear to trust anyone to do an adequate job, I forced myself to become T-shaped. Because there was no one else!

Of course, this was probably taking it too far. I’m still struggling to find the right balance of delegating and effectively leveraging others and going full HULK SMASH DO EVERYTHING mode.

The breadth part of T-shaped is often glossed over; it doesn’t mean you can do everything, but that you have enough knowledge to know what you don’t know. You can still contribute, but you know when to step back and defer to someone who has the deep expertise.

I guess my advice to someone looking to become T-shaped would be…well, try Mark’s approach, it probably works better.

But since the difference between saying you are going to be deliberate and actually doing it is more than most people (myself included) can overcome, I’d say find something you really care about and then don’t let anything slow you down.

You’ll either get more T-shaped or fail with style. Either way it will be a fun ride.