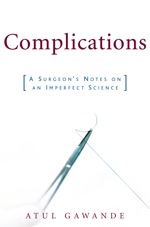 What’s the point?
Being a doctor involves dealing with imperfect information while learning on the job. Mistakes, even ones causing the death of a patient, are unavoidable. Though patients would prefer for doctors to operate with machine-like precision, doctors are only human and can only do the best they can with the information they have.

How was it?
As with Gawande’s other book, Better, I was able to draw some interesting parallels between the medical and software worlds.

Gawande describes the process of new residents having to learn in the field how to do a certain type of procedure (a central line). Doctors can’t possibly learn every procedure in a book or practicing in an artificial setting — the learning has to happen on real patients. But if the patients were asked, they would unsurprisingly prefer an experienced doctor over a new resident.

A similar situation can happen when putting together a software team. If the client has their say, a four person team will be made up of all senior developers. But in reality, you have to mix-in the junior developers in order to build up their ability. General-purpose development teams are often thrown into the deep-end and have to learn as the project goes along.

Surgeons participate in a Mortality and Morbidity panel; the purpose is not to assign blame but to assess and evaluate the decision making process to improve in the future.

An interesting point raised in the book was how with all the new technology like MRIs and CT scans, the number of autopsies has dropped over the years. The test results give doctors a sense of confidence (sometimes a false sense) about their diagnosis; they don’t believe that an autopsy will uncover anything they didn’t know already.

To me, this was reminiscent of project retrospectives. I’ve been on projects that could have benefited from a “software autopsy” report. It is easy enough to declare that the project failed because the client kept changing requirements, for example, but is that the real cause? But clients are notorious for changing requirements and yet not every project fails; a deeper dig to discover the root cause would probably be beneficial.

Who should read it?
I really enjoyed both of Atul Gawande’s “A Surgeon’s Notes” books. I’ve recently started reading more titles from other industries and I find it refreshing to get a new perspective on similar problems.

So if that sounds useful to you, check out this book.