Last year, I wrote a laundry list of my accomplishments in 2011. This time, I want to share some themes in my life for 2012 instead.

A Year of Tracking

I’ve been drawn to the Quantified Self movement since I first read the blog a year and a half ago. I tried to get on the tracking bandwagon a few times, but I always fizzled after a couple days — I need effortless data capture or I just stop doing it.

I bought a Fitbit and a Withings scale for Christmas in 2011 and took another stab at tracking my fitness.

This time, I was able to stick with it and I got some pretty awesome results (lifetime == 2012).

I tried a few different Pomodoro tracking apps (including my own experimental goal-based system) but I found that, frankly, I don’t really like doing Pomodoros. I understand the purported benefits, but I had a hard time stopping when the timer went out. I guess I’m just a momentum-based creature.

I made a concerted effort to read more — by reading on my Kindle before bed — and I read 21 non-fiction or technical books this year, up from 8 in 2011 and 7 in 2010. I keep a queue on books that I want to read as an Amazon Wishlist and write a review when I finish the book as a means of tracking. My favorite book this year was Better: A Surgeon’s Notes on Performance.

Paired with reading, was my own writing. I’d like to try 750words at some point, but for now, I just try to blog every week or so. Thanks to the ease of using Google Analytics (effortless capture!) I’ve actually been tracking my blog since my first post in the fall of 2010.

I wrote 14 posts this year, down from 22 in 2011 — but my blog received double the traffic. Quality over quantity, I guess? A quote from last year’s writeup: “Not bad for a random developer in Indiana!”

I’m really happy with how a few of my posts turned out. I got an early Christmas present when one of my posts appeared in the print magazine Hacker Monthly in November. 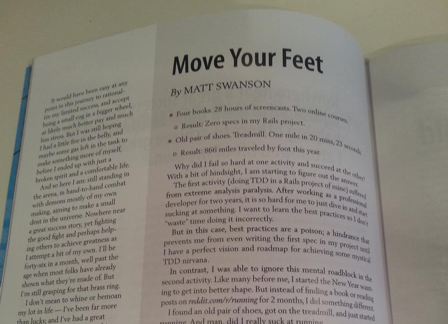 It wasn’t all gravy, here are my failed self-tracking efforts this year:

Tracking was on my mind constantly through the year. I couldn’t even escape it on my SEP projects. The first quarter of the year was spent finishing an Android project for diabetics to track their blood glucose levels and other health metrics. 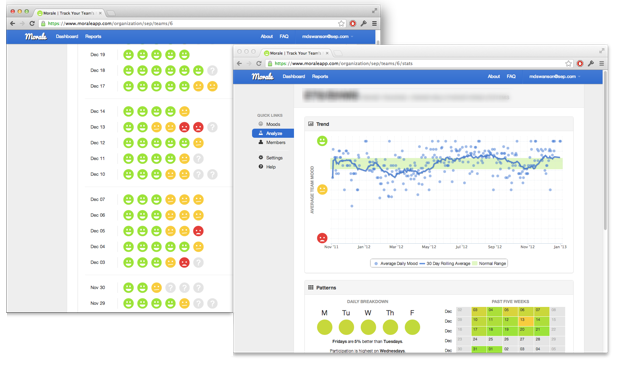 I continued building my team mood tracking web app (above) — Morale. I’ve managed to not only convince most of SEP, but several other companies in the beta, to click a “Good”, “Meh”, or “Bad” face to indicate their mood every day. My weekend hack has grown into a full product and has over 250 users in our current beta. I spent many late nights adding new graphs and visualizations to the app this year.

And since I can’t seem to build anything that doesn’t involve tracking these days, I shipped another side-project in September for keeping track of what TV episodes I’ve watched and which ones are still in my “queue”. I wasn’t happy with any of the existing alternatives, so I designed and built (with TDD) my own. The project, QueueRunner, has turned out to be a great playground for trying out new techniques (I’ve played around with Draper “view models”, running DelayedJob in a unicorn worker, isolated testing) and working on my design chops.

If you saw me at a Meetup or Indianapolis dev event this year, you would probably be surprised if I told you I was paralyzingly afraid of going to these events just a few years ago. I’ve been on the IndyPy meetup group since I graduated college and, while I would read the meeting notes and posted slides, I never could get myself to go to an actual meeting (regrettably, I still haven’t).

I am pretty slow to open up to people and I get anxious in new environments so it was a big personal achievement that I was able to start attending the Indy ALT.NET and Indy.rb groups in 2011. In 2012, I pushed myself out of my comfort zone even further and stepped up my involvement.

I helped with the Indy ALT.NET group’s re-branding and transition to Indy Software Artisans; I gave the first talk of the year (on Redis) and did several lightning talks throughout the year. Behind the scenes, I started attending the admin meetings and helped plan the talk schedule and reach out to speakers.

When I went to Indy.rb, I tried to talk to and meet the people I knew (through Twitter) in person. Fortunately, Miles is a very friendly organizer and there were structured “hack nights” that helped make it easier to not just sit in the corner quietly watching a presentation.

I really enjoyed attending re:build and the Indy Hacker Holiday Social — two events where I decided to sit at home and read HN instead of attending last year. Making new developer friends (that aren’t co-workers) has been great and something I am grateful that I did in 2012.

But my favorite group that I got involved with this year was one that didn’t exist in 2011.

Since March, I’ve been hacking on projects every Monday night with a great group of guys and gals at Indy Startup Lab. Thank you Kyle and Anthony for helping organize this meetup; it is something I look forward to every week. We all push and support each other to get better, ship more, and eat large potatoes. We love seeing new faces at the group, so if you are ever in Indy on a Monday night — please stop by!

You will fail before you succeed, but the payoff is worth it.

For me, this was a year of fresh starts and modest changes (thanks Merlin!) and I was very happy with the results. Here’s to more of the same in 2013.