The past week I have been working on a web-based “announcement board” using a slew of Javascript libraries.

So how did I do? Well I hit all my goals for the week, which were:

The static page was simple enough to setup, especially since I have used socket.io before. I added some basic styling to play around with some CSS3 stuff (border-radius and box-shadow are pretty slick). I send a payload and an action type over socket.io to the page and then perform the appropriate action – adding an announcement, editing the message or removing it all together – with jQuery. 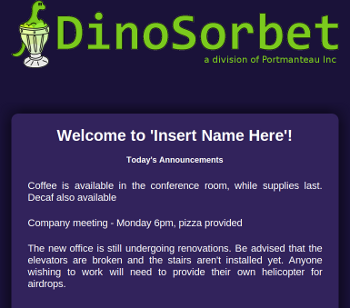 Next, I setup an “Edit” page where you can CRUD announcements. I used jQuery Ajax POSTs to trigger the actions in the database.

Since I am serving the pages with node.js, I had to adjust to an asynchronous programming model. I haven’t been able to wrap my head around this concept in the past – my previous attempts at using monocle and twisted always ended with me frustrated and discouraged.

I spent some time trying to debug why I was not able to pull some documents out of MongoDB and pass them to the template. It took me a while to realize that I need to put the rendering function in the callback for the database query. Otherwise, my application was happy to go on ahead and render the page with an empty array.

Putting the res.render() in the callback ensures that the query has finished and the page will receive the proper data. I imagine this code could still be improved with some kind of asynchronous map function instead of a for-loop, but it works well enough at the moment.

I also ran into a problem with binding jQuery onClick callbacks. Since all of the CRUD functionality uses Ajax POSTs, I was constructing the new announcement divs on-the-fly. If you use the normal $('#foo').click( ... ) jQuery code, only the DOM elements that are present when that function is executed actually get bound.

As a result, any new elements that I add (like when I created a new announcement) would not respond to events. Fortunately, this is easily fixed by using .live(), which binds the event handlers to all selector matches, even those created dynamically. 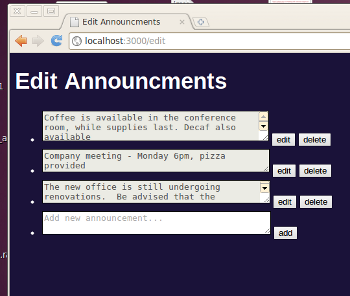 The last goal was to get a simple animation going in the background using raphael.js.
I want to be able to generate a bunch of polygons and then have them animate along a path. Once the polygon goes offscreen, my plan is to loop it around back to where it started to give the illusion of an endless stream.

I used inkscape to make an SVG path (which is really just a string of coordinates and commands) and then had a spinning square follow the path. Since the SVG element lives in the DOM along with the other page elements, I needed to set the zIndex so that the animation would appear underneath the other text and images on the screen.

All together, it was a productive week. Despite hitting a few obstacles, I learned a few new tricks and made good progress; the source code for the app is on Github so feel free to take a look.